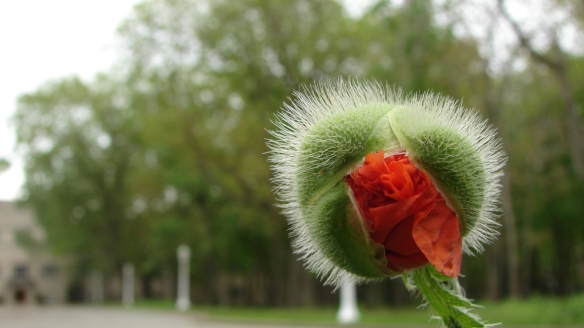 In the temple yard peonies bloom luxuriously
Who opens the flowers’ doors?

With a silent word, the flowers open their petals

The moment I attempt to say,
“opening petals swept by rain all morning,” my tongue is cut off by

(Originally published in Azalea: Journal of Korean Literature and Culture 4)

Moon Tae-jun (1970-) has published four collections of poetry: Chattering Backyard(2000), Bare Foot (2004), Flatfish (2006), and Shadow’s Development (2008) as well as other essays and commentary. One of the most popular poets of the younger generation, Moon uses deceptively simple poetic language with profound lyricism, commenting on the struggle of daily life. Grounded in Buddhist philosophy, his poems speak with reverence for all forms of life and emphasize the necessity of emptying oneself. Moon is a recipient of many prestigious awards, including the Dongseo Literature Award (2004), the Midang Literature Award (2005), and the Sowol Poetry Award (2007).