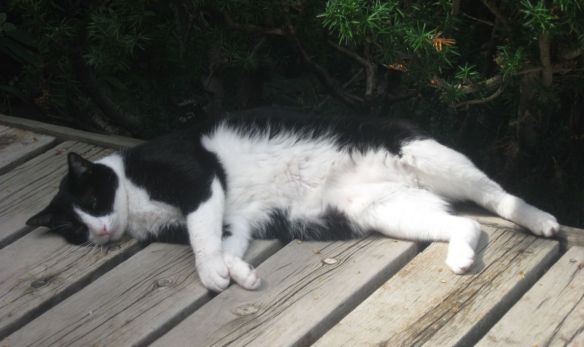 You ate as if for me only.
In a china bowl, your food tinkled
and then you lapped water a bit
as if for me only.
You used a sandbox.
Though I wanted to seize and hold you,
I couldn’t do that.
With small cries
suddenly you hid yourself.
While playing hide and seek, I felt drowsy
but sleep didn’t come.

It was before day broke.
By chance I saw
the way you walked like a tired night
on the long wall beyond two roofs.
The wall had an off-limits sign on it.
You stopped for a moment
and glanced toward me.
You looked for a moment, walking shakily.
You looked so lonesome.
But, oh, your body that embodied geometry
lightly drew a straight line
from where the wall curved
and you disappeared instantly.
In that moment cicadas chirred everywhere.
In that moment, the day brightened.
In that moment, tears welled up.
You went away, over
to a place where you couldn’t invite me.
From far beyond you came.
You looked so lonesome;
I was so lonesome.

Hwang In-suk was born in Seoul in 1958. She debuted in 1984 with “I’ll Be Reborn as a Cat” in the Kyunghyang Daily Spring Literature Contest. She was awarded the Dongseo Literary Award and the Kim Su-Young Literary Award.