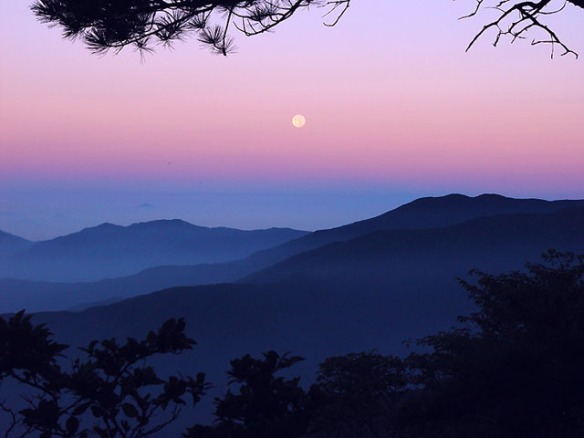 The Moonrise Hill by Lee Sung-bu

The moon that rises over Jiri Mountain
doesn’t illuminate grass and trees and roads,
but she shines upon the traces of tears
that won’t come off from inside people’s hearts.
The stars of early autumn look closer
and the sky is a deep blue mirror.
The hearts touched by this moonlight
have disappeared in a row, intermittently,
into the mountain’s shadow, and today,
even the ghosts have stopped their wandering and shouting
and pass between shadows, dropping their heads.
I only glimpsed the moon that rises over the hill–
a moon that has seen me in the midst of quiet and yet has not spoken–
and I have collapsed on the grass to catch my breath.
Every time brightness and shadow rustle together,
I hear lost love, sorrow, and anger
rushing in again.

Jiri Mountain is located in the southern region of South Korea, spanning three provinces: North and South Jeolla, as well as Gyeongsang. Throughout Korean history, the mountain has taken up a variety of different meanings, reflecting many writers’ desires and needs of different moments in time. For some Korean writers, Jiri Mountain is a tragic figure of tumultuous modern Korean history. For others, it has been a figure of the magical, the sacred, the abundant, and the motherly.  For others, Jiri Mountain has been metaphorized as a mountain of the people and resistance, but also as a mountain of death and resentment, where fierce battles were fought between the end of Japanese colonial rule and the Korean War, slaughtering many Koreans. And still yet, for others, the mountain is a space of life and hope that renews the lives of today and tomorrow.

1 thought on “The Moonrise Hill by Lee Sung-bu”