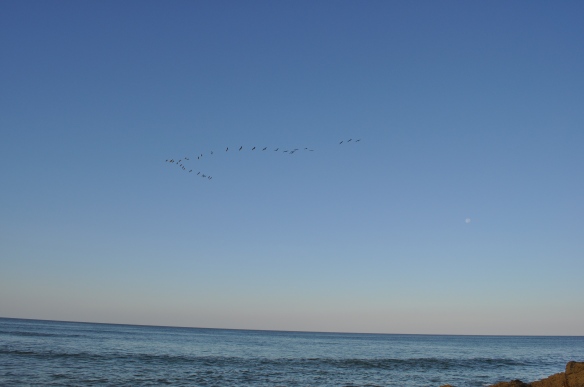 What kind of fish do they dry and hang up in the air
to beat? A few silvery scales are flaking off.
I lift water’s scales, as if peeling shingles from a roof;
from the gravelly bottom of the river, a sandfish leaps and sinks down.

Though the river is already a deep blue, even without a beating,
if it was thrashed with a pole, even now wouldn’t it scream,
bending its waves? When a bird pecks at the bottom of the sky,
with its long beak lifted up, wouldn’t even the sky cry out?

Once, with my hard-clenched, bare fist
I would hit my own deep grooved ribs.

If a craftsman climbed a ladder
and hung a large barrel on a thick rope that he’s made,
and after tightening it with a leather string,
then pulling each end of the space,
made a large drum,
to thrash it with long, heavy drumsticks would only feel futile.

When you are desolate, too weary to stand, or when suddenly full of tears,
look up, the blank space weeps by itself already.